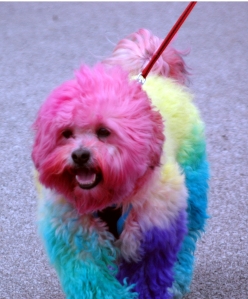 I recently wrote about my biracial daughter and public assumptions about inheritance for the blog DoubleXScience. Nearly the same day, columnist David Brooks’ op-ed piece, “A Nation of Mutts,” appeared in The New York Times. As you might imagine, I read it with interest.

In his column, Brooks writes about how the long-European roots of America are becoming outnumbered by those of immigrants from elsewhere in the world.  Add to that racial intermarriage and mixed-race offspring and you’re left with what Brooks calls the coming New America. What will this New America look like? Brooks is happy to venture guesses, predicting how the complex forces of socioeconomics, education, ethnicity and heritage may play out in coming generations. Among these predictions: that America will become “a nation of mutts, a nation with hundreds of fluid ethnicities from around the world, intermarrying and intermingling.” The piece sparked an outcry from readers and an online conversation via social media, much of it over his use of the term mutt. While it was obviously an unwise and insensitive word for him to use, I think this was the lesser of the problems with his piece.

According to New York Times public editor Margaret Sullivan, columnists are supposed to stir things up. But in “A Nation of Mutts,” Brooks merely takes a centuries-old argument, injects it with Botox, squeezes it into skinny jeans, and calls it something new.

He begins by telling us that “American society has been transformed” as increasing numbers of immigrants have come to the U.S. in recent decades. He adds that, “up until now, America was primarily an outpost of European civilization” with immigrants who came from Northern, Western, Southern, or Central Europe (depending on the era) but all “with European ideas and European heritage.” That is now changing. Brooks tells us that European-American five-year-olds are already a minority. We have thirty years, tops, before Caucasians will be the minority in America overall.

What strikes me is Brooks’ simplistic picture of racial and cultural differences. He portrays America’s past immigrants from Europe as a monolithic, homogeneous bunch (against which he will compare the diverse immigrants of today) when of course this is a straw man. Ask anyone at a European soccer championship match or at the Eurozone bailout negotiations whether Europeans all have the same “European ideas and European heritage.” On second thought, probably better you don’t.

Americans haven’t historically thought of all Europeans as similar or even equal. Take the 19th century Nativists, or Know-Nothings, who thought that immigrants were ruining America. What exotic nation supplied these immigrants? The Tropics of Ireland.

Our country’s long history of interracial children aside, Caucasians from all over Europe have been intermarrying in America for centuries. I have American ancestors dating back to colonial times and am part German and part British with at least one Frenchman and one Scot thrown in for good measure. Why does David Brooks consider my daughter a mutt yet doesn’t consider me one? Because my ancestors all had more or less the same skin color while my husband is several shades darker than me.

So what is David Brooks really recounting when he writes about the coming nation of mutts? What’s so different about the immigrants of today? Mostly superficial details of appearance. Brooks’ New America is based on the preponderance of pigments in skin, the shape and slope of eyes, the texture of hair. His seemingly profound comment is about the spread of a handful of genes that create innocuous (but visible) proteins like melanin. Big frickin’ deal.

Ultimately, David Brooks is guilty of recycling the same tired old tune: immigrants are changing America and who knows what it might become when they’re done with it? Of course immigrants change our national demographics and  cultural melange. Each generation has wrestled with this self-evident fact for different reasons and in different ways. But if there is anything constant about America’s history, it is the presence of immigration and continuous change. Which means that Brooks was wrong when he said that a New America is coming. It has been here all along.