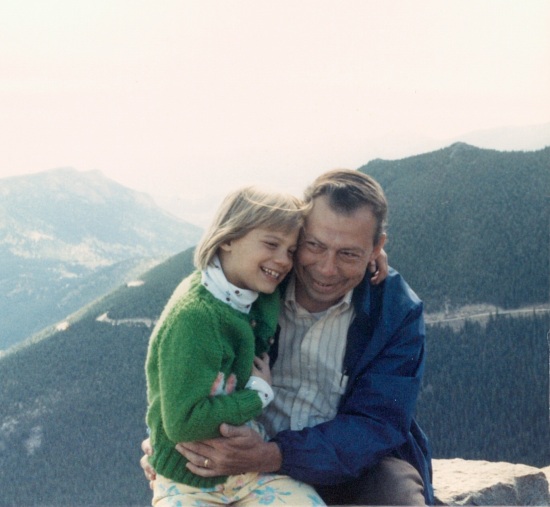 I recently joined a memory lab at Wayne State University. The timing seems fitting, as I’ve been doing a little memory experiment of my own of late. My father died ten years ago today and I’ve found myself wondering how my memory of him has fared over the decade. Which parts of him do I remember and which have I lost? They say we live on after we die, if nowhere else than in the memories of those we leave behind. Is it true, or does my father die a little each day as my brain cells age and adjust the strengths of their tiny connections?

I do, at least, remember how my father looked. Certain small details stick out in my memory – the wart beside his nose, his dulled gold wedding band beside a broad, flat knuckle, the remarkable definition of his calf muscles (thanks to his marathon bike rides). I can still see how he brushed his hair back from his face and how he crossed his legs – ankle to knee – and mopped up his sweat with a paper towel after a long ride. But are those the memories that matter? Do I remember how it felt to hug him? Do I remember all of the stories from his youth or any particular instance (of the many) when he said that he loved me? Not really. Not well enough to save him from oblivion.

I imagine I’m not the first person to experience the guilt of forgetting.

Unfortunately, memory loss picks up speed with the passage of time and the brain changes associated with old age. We will only ever have more to feel guilty about. But sometimes, on rare and bittersweet occasions, a chance encounter can trigger a memory we didn’t know we had. It is the psychological equivalent to finding coins wedged between the cushions of the couch and it happened to me a couple years back.

I was walking home from work when I smelled something. It was an odor I couldn’t identify, one that didn’t seem familiar, and yet it filled me with a sense of well-being. I stopped walking and inhaled deeply through my nose. What on earth was this compound? I spotted a man walking half a block ahead of me. He was a professor type with long white hair, a briefcase, and a trail of smoke fanning out behind him. The smell had to be coming from him, yet it was nothing like cigarette smoke.

I started walking again and then picked up the pace to get closer to the man. I’m not proud to say it, but I started to follow him, inhaling as I went. When he turned a corner I caught him in profile and saw that he was smoking a pipe. The intriguing smell was that of pipe smoke. For a moment I was confused. I didn’t recall having ever smelled someone smoking a pipe before and I find both cigar and cigarette smoke aversive.

Then I remembered hearing stories about my dad’s pipe. A professor type himself, my father smoked a pipe for many years and only gave up the habit after a triple bypass surgery. I was three years old at the time. Thanks to childhood amnesia, I don’t remember seeing or smelling my father with his pipe. Yet the memory of that smell, and the comfort I once associated it with, have been buried in my brain all these years like lost coins.

In theory, the memory isn’t a positive one. The secondhand smoke my brother and I inhaled early in life may have had something to do with the asthma we developed later in childhood. Still, my reaction to that stranger’s pipe smoke feels positive.  Precious, even. I’d like to think it reflects how I felt in those early years when I sat in my father’s lap or wrapped my fingers around those broad, flat knuckles. Contented and safe. And as a mother, I’d like to think that I’m planting the same warm feelings in my young daughter. Maybe someday after I’m gone an association will unearth them and she can revisit that innocent comfort all over again.

Even after I solved the mystery of the scent I followed the smoking stranger for a couple more blocks, inhaling and even closing my eyes as I experienced something of my father that I never knew I knew. It was hard to turn back for home. I didn’t want to lose him quite yet. I wasn’t ready. But then again no one ever is.